After 27 years in Barwon Heads, popular town identity, Vera Montgomery waved good-bye to her house in Hitchcock Avenue and has moved into a unit at Rice Village at Marshall. 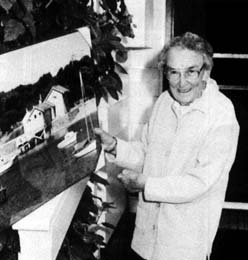 But Vera said she would continue her involvement with many of the auxiliaries and groups in the town. Since arriving in Barwon Heads with her husband Gordon in 1972, she has been a part of almost every committee and auxiliary in the town including Barwon Heads Association, CWA, Holy Family Church, RVIB, Red Cross, RSL, Barwon Heads Community Hall, Hospice and Legacy.
“When we first arrived I was disappointed to learn that the local CWA branch which had been formed in 1950, had closed. I went to Ocean Grove to meetings with other Barwon Heads women for two years,” she remembered. “Hilda Watson was responsible for having the branch reopened in Barwon Heads in 1974 and Vera became the first secretary, with Hilda, president and Ena Hobbs, treasurer”.
But Vera’s first brush with the CWA goes back many years when as a 16-year-old she worked at the Katandra Post Office and General Store, 25 Kilometres north of Shepparton. I used to hear the women talking about this new organisation called the Country Womens Association and they were all lobbying and fighting for positions on the committee and I said then I would never join the CWA!”
Born in Benalla in 1914, she came from a family of five children. Her mother died when she was 7 years-old leaving her father with the responsibility to raise his family. Her first job was at the tiny post office at Katandra where she worked with her younger sister. “The post office and shop was only about as big as two normal house rooms and it used to get as ‘hot as hades’ in there during summer. We travelled to work by pony and buggy and we would leave the pony in the shade of a big old tree during the day”.
The popular Saturday night dance in Shepparton always attracted a big crowd and one night Vera met a young man, Gordon, who impressed her with his dancing ability.  A romance blossomed, but the courtship was interrupted by the Second World War when Gordon joined the army in 1939. But on 14 April 1941, Vera and Gordon we’re married. After his discharge from the army in 1945, the couple moved to Brunswick where Gordon worked in a timber yard. Vera said he didn’t enjoy the work, but yearned to run a farm in the bush. “One day Gordon came home and showed me an advertisement in The Weekly Times for a little farm at Lower Gellibrand. I had never heard of the place, but Gordon went down there by train the next day and after looking over the 340 acres of mostly bush, he put down a £20 deposit. Gordon really loved the bush and he refused to clear the land”.
The family moved to Lower Gellibrand in 1948 and began milking 11 cows on the farm. “It was a tough life down at Gellibrand, we had no   electricity and no telephone for years, but we loved the life.” It was while at Lower Gellibrand, in the Otway Ranges, that Vera began to realise the benefits of the Country Womens Association and she joined the local branch.  “Gordon always said he would retire at 60 and I always dreamed of living by the sea.   One afternoon when we were driving home, after a pig sale in Colac, I was reading the list of houses for sale in the local paper. I saw a house for sale at Barwon Heads.  We bought the house soon after and moved in, in August 1972.”
Vera’s close friend Bonnie Cameron recalls welcoming Gordon and Vera, the day they arrived at their new home at Barwon Heads. “All Vera wanted was a cup of tea and she couldn’t work the electric stove. They had always used a wood stove at Gellibrand”. Bonnie laughed
After being involved with the small local community at Lower Gellibrand for 24 years, Vera was keen to make new friends in Barwon Heads. She said the best way she knew was to join the local organizations and immediately signed up with the Red Cross Auxiliary. Since then she has been a president, secretary or treasurer of most groups in Barwon Heads and has made many friends. Her friends became very important to Vera when she suffered her greatest loss when Gordon died in 1985
“It was due to all my friends that I have been able to carry on.” she said Vera is very passionate about the community spirit in Barwon Heads which she says must be maintained. “People must support the community hall,” she stressed. “And what get’s me really mad is that so many people won’t support the community groups.”  During a special CWA meeting last month large group of members and friends gathered to honour Vera and present her with a framed photograph of Barwon Heads as a memento of her many years of service to the group and the town.
greg wayne May 1999

Barwon Heads loses one of its stalwarts VERA Montgomery, a wonderful community worker for Barwon Heads and one of its most loved local identities, died on January 16, at Rice Village, Grovedale, aged 92. This sprightly woman, with a sense of humour to match, immersed herself in Barwon Heads’ community organisations after she and her husband retired there in 1972. She was especially passionate about the Barwon H eads Country Women’s Association, Holy Family Church and her family. Vera  Montgomery was bom in Benalla, on January 20, 1913, the third of five children of Ted and Annie Kyne, who were  related to famous Collingwood footballer, Phonse Kyne.
Her early years were spent on family farms at Goorambat and Devenish, near Benalla.
Tragedy first entered the young Vera’s life at the age of seven, when her mother died. Vera attended Broken Creek State School — and could remember riding there on her pony — and St Joan of Arc Catholic School, in Melbourne. Vera worked at several jobs in the country and in Melbourne, the longest being as a telephonist at the Post Office exchange at Katandra neer shepparton.
She met young shearer Gordon Montgomery at Shepparton’s regular Saturday night dance in 1940 and they married in 1941. Their first son, Robert, was born in 1943, before Mr Montgomery was  posted to New Guinea with the Australian Army.   Returning from the war, tragedy struck again when daughter Joan, born in 1945, died of leukemia at the age of 20 months.
One day Mr Montgomery saw an advertisement for a 340 acre, mostly bushland, dairv farm, at Lower Gellibrand and the young couple bought it.
They milked 11 cows and did it hard for many years without electricity or a telephone, but they enjoyed the lifestyle. Life gradually improved with the arrival of mod cons and two more sons, John and Michael.
Mr Montgomery had always promised to retire at 60 and one day, in 1972, Mrs Montgomery noticed an advertisement in a newspaper for a property in Barwon Heads. They bought it and never regretted the decision, quickly making many friends and becoming heavily involved in community activities. Mrs Montgomery found the local branch of the CWA had been disbanded and women were attending meetings of the Ocean Grove CWA.  With several other women, she reactivated and became a founding member and first secretary when it re-opened in 1974.
Mrs Montgomery was also active in the Barwon Heads Association, Royal Victorian Institute for the Blind,Red Cross,Barwon Heads Community Hall, Hospice and Legacy.
The Barwon Heads Hospice group raised $10,000 a year over 10 years. Mrs Montgomery was president, secretary or treasurer of many of these organisations and received honours from many, including a life governorship of the RVIB.  Mr   Montgomery died in 1985 and Mrs Montgomery moved to Rice Village in 1999.
Mrs Montgomery is survived by Robert, John and Michael, and their families
— Daryl McLure

Back to People and Places