Man of many talents

Frank Ellis, one of the early `founders` of Barwon Heads, contributed much to the town Barbara Godlewski talked to Frank’s daughter Dorothy about his life and legacy
Many local residents frequent the Frank Ellis Reserve in Barwon Heads. Some would remember the man himself. Only a few, however, know of his contributions to the community of Barwon Heads. 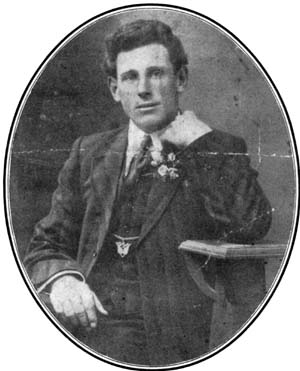 His daughter, Dot Lawn, proudly speaks of her father’s life as she looks over souvenirs from the wreck of the SS Orungal.
Born in Mt. Duneed on 24 July 1891, Frank’s boyhood days were spent in Barwon Heads with his parents and 11 brothers and sisters. The family would come for their summer holidays on a horse and jinker.
In 1914, he married Geelong girl, Alice Florence Spendlove and like Frank, she was the eleventh of twelve children.
The couple set up a fruit and vegetable shop in Geelong. But Frank always had a soft spot for Barwon Heads, so in 1929 Frank and Alice moved with their family to Barwon Heads. Frank built his first shop in Hitchcock Avenue on the site where the Pick and Peck business stands today. In the 1930s he extended it to a double frontage. Frank delivered fruit and vegetables on his cart with the help of his three-year-old daughter, Dot.
I would sit on the cart” recalls Dot. “The taste and the look of the fruit and vegetables was so different then.”
Dot diligently delivered fruit and vegetables to the Barwon Heads Hotel in a pram and returned home with a bottle of beer for Dad. “On the way home people looked in my pram to see my dolly but low and behold there was a bottle of beer.”
A talented man, Frank rebuilt old row boats and moored them at the Ozone Jetty. He kept four boats for hire and all the boats were named after birds, but Dorothy was the name given to his first boat.
“He loved to go fishing and would row all the way around to the Sheepwash and upstream into Connewarre Lakes.” said Dot. “Sometimes the boat would leak and with jam tin hand, I was his bailer. During these times Mum remained at the shop. She was glad to get rid of me,” says Dot smiling.
In the park near the Barwon Heads Football Oval, which he had a hand in building, Frank Ellis operated a kiosk. He later moved the kiosk to the entrance near the bridge.
The next location of the kiosk was across the bridge on the right hand side just near the banks. I can still picture myself as a toddler being pushed across the bridge on a three-wheeled bicycle with a blue box and bar in front,” says Dot. “I’d get thrown amongst the ice cream cones and sweets. The sign in front saying ‘Frank Ellis Barwon Heads’ written in silver frost on the blue door.”
Dot said that her father was ambidextrous-able to write with either his left or right hand- and would delight others by writing on mirrors back to front.
Another of his many talents was signwriting. In a time when there were few signwriters, Frank’s signwriting skill attracted many people. He was an extraordinary man who could turn his hand to many skills. He was clever, yet had little education having only attended a country school at Mt. Duneed.
On 19 November 1940, the coastal steamer SS Orungal ran aground on Formby reef, about a kilometre east of The Bluff at Barwon Heads. Later declared a total wreck, it was sold to Whelan the Wrecker and Frank was one of the local men given the task of ferrying the salvage crew out to the wrecked ship and returning them to shore in the evening.

The salvage crew was billeted at local guest houses Croydon and Talangion on the corner of Hitchcock Avenue and Colite Street.
Frank Ellis was the first captain of the Barwon Heads Fire Brigade and retired as a life member after 20 year’s service. He was also involved in many other activities in the town. Football, cricket and golf, as well as being on the Barwon Grove Committee, a social golf club which raised money for charities, and a member of the Progress Association, a society formed to implement town, improvements.
While looking through old photographs, Dot came across some photocopies of all the signatures of those who offered their services during the Barwon Heads flood of 1952. Frank Ellis is listed, not surprisingly, among “… those who rendered invaluable service to the township of Barwon Heads”. Frank Ellis also worked in a gang of men who originally planted the marrum grass covering the sand dunes today.

In 1946, Frank sold the fruit and vegetable shop and built Sunray, the family home in Hitchcock Avenue. Alice became ill during this period and after she died on 5 April 1949, the family moved house again.
Sadly, on 14 June 1965, this gifted and prolific man was killed in a car smash on the Geelong Road, one kilometre from Barwon Heads – he was 74.
“The funeral was big, we held it at the Geelong City Fire Bridge. We received cards and letters from people far and near, for months afterward.
“People were in shock long after it happened,” says Dot.
The man who was a builder, shearer and signwriter. The man who chipped-in to serve his local community, offered assistance wherever needed, and supplied the town with fruit and vegetables for many years, left behind a loving family and many grieving friends.
The next time you pass the Frank Ellis Reserve, or kick a footy around the football oval, you’ll know that Frank Ellis was responsible for shaping this town of Barwon Heads.