Bonnie Cameron is a Barwon Heads icon. In fact, 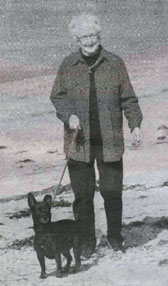 her name is synonymous with the seaside town.
She is the voice of the community -the person who stands up to protect her beloved Barwon Heads.
The youngsters in the town call her “the legend”, while the adults quietly agree. Bonnie is appreciated for the work she does around Barwon Heads, particularly her dedication to helping “the boys” at the Barwon Heads Football Club up until last year.
Bonnie lives to help others and has served on several-if not dozens – of Barwon Heads community groups.
While she no longer serves on the football club committee, Bonnie is a life member and still gets actively involved in other community groups including the Country Women’s Association, the pony club and the film society. She also serves as president of the Barwon Heads Community Hall Committee, a member of the Association of Barwon Heads and a volunteer at the Anglican Church opportunity shop-just to name a few.
Bonnie has been known to stir a little controversy in her time.Whether it be her outspoken views against council decisions or muscling in on male dominated committees in her earlier days, Bonnie has never hesitated to step forward.  And at 76, controversy is not likely to fade, especially when Bonnie attacks an issue she believes in.
Bonnie has joined the Association of Barwon Heads’ latest fight to protect the Barwon Heads library from closure.
She is also working to build a disabled toilet at the community hall.
Celebrating her 77th birthday next month is not likely to slow her down.
The sprightly Bonnie couldn’t even be slowed down when she suffered a stroke last year.
Only because the doctors forced her to did she stay away from the Barwon Heads social scene for a couple of months.
“But I threw the walking stick away,” Bonnie laughed.
She told The Echo that she loves  her life in Barwon Heads and nothing can get in the way of her enjoying it.
Bonnie has lived in Barwon Heads since 1949 and has seen the town grow to a thriving holiday destination.
She recalls the major floods of 1952 where her family “lost everything”.
And as a resident who has lived in the town almost longer than anyone, Bonnie is the first to embrace the changes Barwon Heads has seen over the years particularly the excitement ABC television program SeaChange brought with it.
When Bonnie -who says she never married because she “didn’t have time” -is not fighting for Barwon Heads, she is relaxing with her puppy Cammie.
Bonnie’s idea of relaxing is to knit woollen beanies for the homeless.
She also voluntarily writes the Barwon Heads Town By Town column in The Echo.
And while Bonnie doesn’t have plans to take on any more commitments, she does hope to stay busy for the rest of her life.
There is just one thing she is yet to do- something she has always dreamed of.
“I have always wanted to pull on the boots for the football club and run around the ground,” she jokes.

BONNIE Cameron has no hesitation in saying what her Australia Day honour means to her. “Everything, really,” she said. Ms Cameron will today receive a Medal of the Order of Australia for her service to the community of Barwon Heads through a range of service, sporting and church related organisations.
It is that sporting connection with which she takes the most pride, having served her beloved Seagulls for decades. It has seen her win a host of awards, including the Bellarine league service award and life membership status in 1986. “I did the canteen, organised a hot roast on a Thursday
night for the boys, and laundered the jumpers for four teams,” Ms Cameron said. “I’m mad, aren’t I? “  I loved it—being with the juniors and seeing them all grow up.”
Ms Cameron moved into Barwon Heads in 1949, and has seen almost everything in the town. “In 1952 we flooded out, we were out of our home for 16 weeks,” she said. “It was dreadful having to go back into the house again and clean it all up. “We were in the lounge with the fire going, trying to dry out the carpet.”
From the Country Women’s Association, to the Film Society and Festival of the Sea, to working and volunteering for the Senior Citizens’ Club, Barwon Heads Association and All Saints’ Anglican op shop, Ms Cameron has been a constant in the town. “You get to know everybody,” she said. “Not now though, it’s grown so much. “ (TV series) SeaChange has brought it to a head. Since SeaChange it has altered it a lot.

Back to People and Places