The Following is a short extract from The “Queenscliff  Pilot” A Holiday and business Guide to the Bellarine  produced in by  Alex. J. Bennett and printed by N.B. Johnson & Son. in the 1950’s. 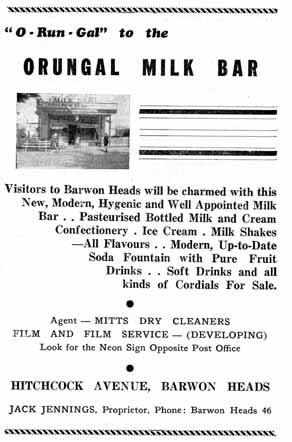 Early reference to Barwon Heads was made by J. T. Gellibrand in 1836, when his party accompanied by William Buckley (“Wild White” man), as guide and interpreter left Indented Heads on their way to the “Settlement” on the Yarra. Observing breakers on each side of the Heads they followed the river Barwon towards Geelong, referring to Lake Connewarre as “a great marsh, where they shot some wildfowl and a large musk duck, which they had for supper.” Eventually they reached Queens Park where Buckley showed them the hollow tree in which he used to live and places where he caught fish during his 30 years life with the blacks. 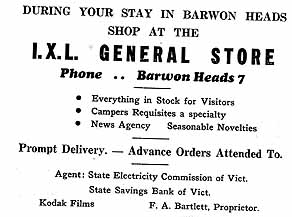 SCENE OF MANY WRECKS. – The treacherous volcanic reefs that lie out to sea from beneath the Bluff at Barwon Heads, have been the scene of many wrecks – the last on November 21st, 1940, when the “Orungal”, in a terrible rough sea bumped on to the “Formby Reef” and on December 13th of that year caught fire. Men on salvage work  barely escaped, and some were injured arid taken to hospital. The name of the “Orungal” is commemorated by the proprietor of  “The Orungal” Milk Bar (Cr. A. R. Jennings), who was engaged on salvage work. Scene of this wreck is: about a quarter of a mile east of the Bluff – sections of the Orungal are still visible at low tide
When the Earl of Charelmont struck the reef on the eary morning of June 18th, 1853, in squally weather, all efforts to get the boats out to get a line ashore failed, when a passenger volunteered to swim ashore and succeeded in landing with a line. The lifeboat was cradled to the rope then ladies and children first then invalids and married men followed by the remainder were brought ashore. By heroic work the 455 passengers of the Charlemont were saved – only one man died aboard from shock.. He was buried by his son on the Bluff.
In the early 80’s the beauty of Barwon Heads became appreciated and a few houses were built near the Bluff. A Park Trust was formed in 1889 and devoted to beautification tree planting, etc.
“Ye Barwon Heads        Most Champion”  Seaside Resort

About this time a Mr. Dungey built his Coffee Palace here and in his advertisement said : “Ye Barwon Heads” and which is spoken of by all travellers as “Ye most champagne seaside place to visite in everie season, ye weather in wynter being of ye moast mylde and clement kynde. Cobb bys Stage Coaches journie thither everie day !” 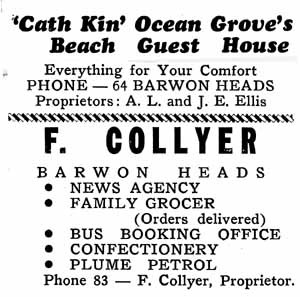 Barwon Heads is unique as the Estuary of the Barwon River providing river sports as well as its beautiful safe surfing beaches, its natural rugged scenery, and its wonderful, deep, shaded Hitchcock Avenue, affording cool conditions on the hottest days. Its camping park undoubtedly the best and most well appointed around the coast, is the Mecca of the Caravaner and Camper. The Park is sewered, water laid on, electric light, dressing enclosures and every facility provided for those occupying perfect camping sites which adjoin the river. River shallows provide juvenile bathing whilst across the bridge splendid ocean surfing is obtained, and also to the West of the Bluff. It is a fishing centre of note and plenty of fish available in season at the Pier.