The origins of the peninsula can be traced back to the Cretaceous period when Australia split from Antarctica in the final break-up of Gondwanaland. During that time, a rift valley formed between the two continents and was filled by sediments deposited by fast flowing, braided river systems.

The sediments, which were derived from the erosion of large volcanoes, now form the grey to greenish grey fieldspathic sandstone (greywacke or arkose) and mudstone ‘bedrock’ of the Bellarine Peninsula. These rocks, exposed in outcrops from Clifton Springs to Portarlington, underlie the entire peninsula.
Following the continental break-up, the Australian continent moved northwards. As a result of the split, the southern edge of the Australian continent experienced uplift, creating the South-Eastern Highlands. The erosion of the highlands provided a source of sediment that was deposited into the widening basin between the two continents.
The sea had inundated the entire peninsula by the mid Miocene, when the coastline was situated as far inland as Meredith. As the sea retreated during the Pliocene, it left behind a thin deposit of sand – the Moorabool Viaduct Sand -much of which covers the central part of the Bellarine Peninsula. 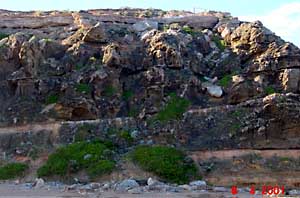 The collision of the Australian Plate and the Pacific Plate during the Miocene created the SE-NW compressional stress field that Victoria currently experiences. This stress field activated faults at right angles to it, including the Bellarine Fault and the unnamed fault east of Point Henry. The continued activity of these faults has lifted the Bellarine Horst to its present level.
Shortly after the uplift in the Pliocene, the coast between Torquay and Ocean Grove comprised a large funnel-shaped embayment, narrowing towards a wide channel that ran to Corio Bay. The embayment was shallow, with a floor of Tertiary (mostly Miocene) sediments. Changing sea levels associated with the continued retreat of the sea constructed a series of small barriers and lakes throughout the embayment, resulting in the deposition of a series of dense shell beds and minor sands, which now underlie the Connewarre Lake system.
In the Late Pliocene or Early Pleistocene, volcanic eruptions commenced at Mount Duneed and lava flowed into the shallow embayment. As the lava progressed eastwards, it divided into three separate flows, a westerly flow along the Tait’s Point – Fisherman’s Point ridge, a central flow northeast of Pelican Rocks, and a larger southerly flow from Black Rocks to the Bluff. Lagoons formed behind these lava barriers, as the Barwon River was dammed for some time. Eventually, the Barwon cut through the Taito’s Point – Fisherman’s Point barrier, then the Shook Point- Pelican Point barrier, and continued along the edge of the southerly lava flow between the Bluff and Ocean Grove.
From the mid Miocene onwards, the polar ice caps formed and sea levels began to fluctuate more dramatically in response to climate changes. Sea-level changes over the past hundred thousand years are responsible for the development of the present day landscape and features of the Barwon Heads – Ocean Grove area. During the last inter-glacial period, about 125,000 years before present (BP), sea levels were generally about 6 metres higher than present. As a new glacial period (ice age) developed, the sea levels trended downward, but with a series of reversals during short warming episodes .
As the sea levels dropped much of the continental shelf between Victoria and Tasmania became exposed. The colder, drier climates were accompanied by periods of high winds, which mobilised the sediments on the exposed sea-floor to form dunes along the emerging coast. During this time a large sand bar barrier the Nepean Bay Bar – formed across the front of the broad depression of Port Phillip Bay. The barrier was built up by overlapping dunes and beach deposits with a high calcium carbonate content, to form aeolian calcarenite. At Barwon Heads, this material accumulated on the basalt and now forms the cliffs exposed at the Bluff. 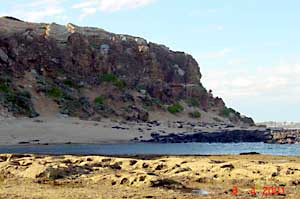 During the intervening warmer episodes, wetter climates and vegetation growth were probably responsible for the development of soils on the calcarenite dunes, Calcium carbonate mobilised from the topsoils was translocated down the profile to form calcrete horizons. The plant roots provided pathways for percolating groundwater to form soil pipes. At the onset of cooler and drier climates, aeolian activity recommenced and the soils were buried, forming palaeosol horizons in the strata.
As the shoreline receded, the Barwon and other rivers lengthened their course and deepened their valleys to reach the ever-distant sea. The rivers cut through the Nepean Bay Bar and other dunes that had formed on the floor of the exposed Bass Strait. At the glacial maximum, around 18,000 BP, sea levels were about 120 to 150 metres below present day levels.
After the commencement of deglaciation (- 17,000 BP) sea levels rose rapidly to reach present day levels by 6,000 BP. The rapidly rising sea levels must have resulted in extreme rates of shoreline migration, estimated for Australia as 20 metres per year or 40 centimetres per week! On the Bellarine Peninsula, shell beds dated at 6,000 years suggest that sea levels were one or two metres higher than present day. Although they have since dropped to present levels, it is believed that they have risen slightly over the past century. 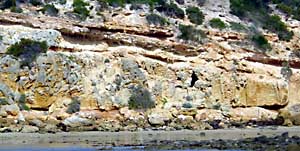 The basalt, exposed around the eastern base of the Bluff and shore platform, is fine-grained and sometimes vesicular, composed principally of olivine, augite and plagioclase. On the north eastern side of the cliffs, the basalt exposed at the unconformity is weathered to a mottled red-brown and grey clay, being the ancient soil developed on the lava flow before it was covered by the dunes. This palaeosol shows highly weathered basalt boulders (corestones or ‘floaters’) in a matrix of clay, the upper part of which has been oxidised (red-brown) and is gleyed (grey) lower in the profile. In places, the weathered basalt and palaeosol has been preferentially eroded, resulting in overhangs of up to approximately 3.5 metres of calcarenite .
Above the basalt on the northern side of the Bluff, the fawn to pale yellow-brown aeolian calcarenite forms steep cliffs. The aeolianite is composed of crossstratified beds of cemented well-rounded quartz sand and shell fragments. The foreset beds that formed on the lee side of the dunes, are those with the steepest dip. They indicate that prevailing southerly winds, bringing sand from Bass Strait, formed the dunes. On the southern side of the Bluff, the predominant dip of the cross-stratification is not as obvious (since it dips north), but the variations in wind direction remain clearly recorded by the changes in inclination of the strata. 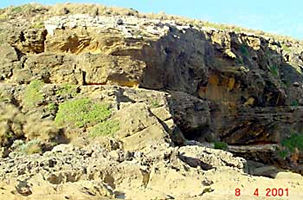 Infiltration, derived from both rain and ponding surface water, has formed calcretes and solution pipes, especially in the upper levels of the cliff. The percolating water, acidified by carbonic and humic acids, dissolves the calcium carbonate (CaC03) in the rock and then redeposits it when the water evaporates. In this manner the CaC03 is translocated down the profile to form calcrete layers. These are most obvious as the pale yellow to white layers of hard limestone that cap the Bluff. In places the calcretes have been eroded, broken, and recemented to form a thick layer of breccia. Griffith (1893) noted the presence of some basalt in the breccia and concluded that there was an alluvial component, attributed to the Barwon River. Solution pipes, often lined with calcrete, formed as root channels, plant stems and tree trunks covered by the dunes, provided preferred pathways for the infiltrating water. The pipes project down into lower layers, and some have been enlarged by infiltrated water, filled with sand or filled with rubble that has been recemented to form breccia tubes.
At least six palaeosols are layered in the calcarenite, each representing a period of stability in dune building when soils (and presumably, vegetation) developed on the surface. In some exposures the palaeosols have been preferentially eroded, forming overhangs of calcarenite or calcrete.